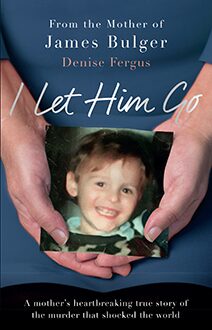 Twenty-five years after the brutal and tragic murder of two-year-old James Bulger comes a reflection on a little boy’s life from his mother Denise.

On 12th February 1993, Denise’s life changed forever.  After running errands in the New Strand Shopping Centre, Merseyside, Denise went into the butcher’s shop to buy chops for tea. She let go of her two-year-old son’s hand to take out her purse – and never saw him alive again. His name was James Bulger and I Let Him Go is his mother’s heart-breaking account of that day and the living nightmare that followed.

Denise says: “When I gave birth to my baby I was full of hopes and dreams for him – but the one thing I didn’t ever imagine was burying my son’s tiny body after his murder. No parent wants to outlive their child or say goodbye – it’s impossible to imagine – but my final hours and minutes with my beautiful James will be forever etched in my mind until my dying day. Much has been written about our story but the time has finally come for me to say it in my own words.”

Heart-breaking and inspiring, I Let Him Go is the story of an exceptional woman – a mother who lived through every parent’s worst nightmare, but who found a way to let go of the despair and remember instead the happiness that James brought his family.  With the help of a ghost writer, Carly Cook, Denise is now ready to open up and share her extraordinarily powerful story.

Denise will speak unflinchingly about the morning of James’s abduction – how she almost didn’t take him shopping at all; how she usually put him in his buggy; how if she had turned right instead of left out of the butcher’s, she might have seen him being led away. She talks about the hope she felt after CCTV footage showed that James’s abductors were just two young boys, not grown men. But James’ body was found on a railway line two days later, and when Robert Thompson and Jon Venables, then aged eleven, were found guilty of James’s murder, they were the youngest convicted murderers in modern English history.

It was a case that horrified the world, and its reverberations are still felt today. A donation from all book sales will go to the James Bulger Memorial Trust, launched by Denise to support young victims of crime, hatred or bullying. In January 2017, she was given the British Citizen Award for her tireless and selfless work to help other families going through similar situations.

Natalie Jerome, Licensing & Brand Director of Kings Road Publishing says: “I’ve been an Editor and Publisher now for almost 20 years and I can genuinely say that, for the first time ever, time seemed to stand still reading this. From the first few lines – immediate, powerful, visceral – it was clear that this was a book, a very special book, that we, as a team here at Kings Road Publishing had to move quickly to acquire. We made an offer within 20 minutes of receipt of the proposal. This is a mother’s tale – of the joy that James brought, of the deep despair and guilt over his death, and of her long fight for justice. The torturous legal battle Denise took up for James ultimately helped to change the way the law treats victims of crime. She is an incredible woman and we’re beyond proud to have been chosen by her as her publisher. Above all, Denise does not want James to be remembered as a murdered child and we’re going to work tirelessly to help her achieve that with this beautifully written book.”